Ireland's anger a taste of life after cuts

Ireland's anger a taste of life after cuts 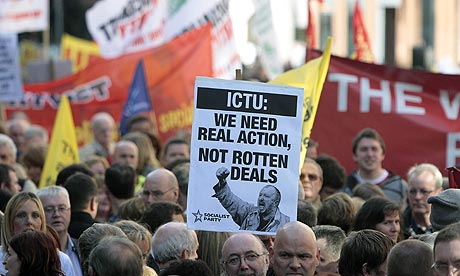 Some of the simmering anger that is felt in Ireland was demonstrated this week when a cement truck, painted with the words "Toxic Bank", was driven into the gates of the Irish parliament in the early hours of Wednesday morning. The truck was swiftly removed and its driver detained, but a few hours later, as politicians tried to return to parliament after their summer break, the same fury was articulated by a noisy trade union march crowding the streets outside, the protesters shouting through loud speakers that "455,000 of our fellow citizens have been thrown on the scrap heap".

This protest was something of an anomaly, however. For the past two years, while Ireland has introduced cuts with an extraordinary speed and seriousness, the public anger of the population has been restrained. Now, as Irish politicians grapple with the latest expensive banking bailout, and begin debating where to place the next round of cuts, the situation in Ireland â€“ and its people's response to the austerity measures â€“ will be scrutinised by Britain's political leadership. If Ireland was held up at the beginning of the year by economists across Europe as a role model in how to cut fast and efficiently, the country is increasingly being showcased, particularly by the left in the UK, as a cautionary tale in the perils of cutting too much, too fast.

Finance minister of state, Dr Martin Mansergh (who is to give a speech in London next month billed: How to Cut Public Spending), cautions against using Ireland as a role model, and underlines the differences between the countries, most importantly Ireland's membership of the eurozone, which gives it fewer choices on how to handle the crisis.

Unlike in the UK, he says, there was little dissent among politicians over what needed to be done. "There was never a question of choice." None of the major parties have proposed a stimulus package as the solution to Ireland's soaring deficit and unemployment (which has tripled since the start of the economic crisis to almost 14%).

It helps that memories of the 1980s financial crisis in Ireland are fresh: then a slow response led to a protracted and painful recovery. As for the public's stoicism in the face of such deep cuts, he says: "You can feel anger towards the developers, the bankers, but that doesn't provide a constructive solution." Most unions, he says, have advised their members: Don't rock the boat or we might all sink. "I think the public understand that to protest will make the situation worse," he says.

The process has been undeniably painful: Mansergh has seen his salary cut by 20% and overseen a 35% cut in the Office of Public Works. "Everybody has been affected but there are a lot of people who are aware that notwithstanding the hit, they are a lot better off than they or their parents were 20 years ago. It is very far from the case that all the gains have been lost," he says.

This is an argument that offers little comfort to Ireland's newly unemployed and families on a low income who are feeling the pain of the cuts very sharply. Their accounts should make sobering reading for public sector workers in the UK. For a taste of what life with heavy public sector cuts looks like, a visit to Dublin is educational.

Take Sarah, a 44â€“year-old single mother and care assistant in a residential home for adults with learning difficulties. In the space of two years she too has seen her wages drop by around 20%, she calculates, leaving her with a â‚¬250 (Â£217) hole in her monthly take-home pay of around â‚¬1,200. As her salary has fallen, she has found that her workload has increased substantially because the workforce of nurses and care assistants at the home has dropped by about 25%.

In fact services for people with disabilities across Ireland have been badly affected (as charities fear they will be in the UK), and Sarah is witnessing a worsening in the care her patients receive.

The daycare centre next to the care home, on the outskirts of Dublin, has been closed because of funding cuts, so patients no longer have a programme of activities during the day and are left to sit in the unit where they sleep with little to do, and with fewer staff to take care of them. Parents of children with severe disabilities used to be able to leave them at the unit for a weekend every month, for respite care, but these services have been cut back, so that they too are under increased strain.

"The quality of care is suffering, but there is nothing we can do about it. We are struggling as it is," she says.

At home, she has stopped taking holidays and doesn't know when she will be able to get her car mended. It has been parked, unusable, outside her house for the past eight months. She shops around for discount items and cannot remember the last time she took her 11-year-old daughter out for an excursion. She has also seen a reduction in child benefit. The only indirect positive from the austerity measures has been that the busy pub she lives next to has seen a huge fall in business ("People are too poor to go out socialising," she says) so the noise levels have been reduced.

Having less money has affected her pride, she says, although this is mitigated by the sense that she is not alone. On the whole, though, people are too frightened to protest. "People are terrified about complaining. People think 'Well, I have a job now â€¦ maybe if I complain, I won't have one'," she says. Anxious about her job security, she asks that her real name is not used.

Outside a busy welfare office in central Dublin, there is more anger at the government, voiced by the newly unemployed queuing to collect their benefits. "We are paying to bail out the banks," Steve, 23, who also prefers not to give his full name, says. He is a former taxi radio controller who lost his job in the summer. ("Nobody has any money; they can't pay for taxis.") His unemployment benefit has been cut by â‚¬5 a week. "Five euros wouldn't make any difference to someone on â‚¬100,000 a year, but it does to me. The government needs to stop taking money from the poor," he says.

At his office in a windy and desolate corner of one of the city's many half-occupied new glass developments, John Fitzgerald, an economist at the Economic and Social Research Institute, an independent thinktank, again questions the usefulness of taking Ireland as a salutary tale: "It is clear that the world has doubts about the ability of Ireland to survive, in which case you have no choice but to take action. In the UK you are fortunate that with rather worse debt figures and with similar borrowing requirements, the world doesn't think that the country is a basket case, so you have a choice as to what to do," he says. He himself has taken a 15% pay cut, but argues that public sector pay had risen to unsustainable levels.

These views are echoed in the office of Philip Lane, economics professor at Trinity College. "We were in such a big hole that we did a lot relative to other countries, but not a lot relative to the gap we have to close."

Michael Taft, research officer for Unite, Ireland's second largest union, disagrees. "There has been a very one-sided debate, with no mention of the possibility of a stimulus programme to encourage growth." Taft likes to take visitors on a walking tour of Dublin's economic collapse, pointing out startling highlights such as abandoned housing developments and the unfinished carcass of the new headquarters of the troubled Anglo Irish Bank. "Our position is that there should be a major investment programme, pouring euros into the economy to create jobs and restart economic activity."

This belief is shared by Gerry Adams, who travelled from Northern Ireland to support Sinn FÃ©in colleagues and lead Wednesday's protest. "What the government is doing here is totally and utterly mad. They're bailing out the banks and the citizens are going to have to pick up the tab. Public services are going to be sliced, at a time when half a million people are on the dole," he says.

At the moment, with the mainstream opposition offering broad support to the government on its handling of the economy, these are minority voices. The challenge for Brian Cowen's Fianna FÃ¡il-led coalition government will be in handling the backlash if public hostility grows with the next round of cuts.
To resist the influence of others, knowledge of one's self is most important.

Return to “News and Current Affairs and local News”